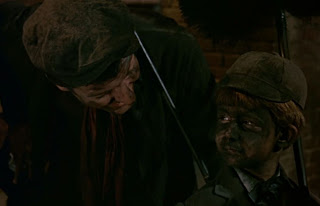 No worries, Mary Poppins will make Michael bathe sooner than later,
reducing the length of exposure to carcinogens.


"IT'S JUST GOOD CLEAN SOOT, MICHAEL!"
When we were last discussing chimney sweeps, Mary Poppins the movie, and scrotal cancer, I mentioned how unpredictable cancer can be. Often cancer develops years after the exposure that mutates and changes cells so that they eventually become cancerous.


That's what happens with scrotal cancer. Boys sent up those 17th and 18th century chimneys were exposed to the carcinogen (soot), later developing the cancer in adulthood(1). If they continued in the profession as men, protection from soot didn't improve just because they kept their clothes on.  English(2) sweeps of the time wore loose clothing that allowed soot to creep into all sorts of bodily crevices. 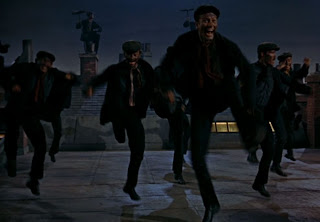 According to Disney, loose clothing was no longer worn by chimney sweeps
such as Bert (Dick Van Dyke) and his cohorts.


How did Percival Pott(3) know to associate scrotal cancer with chimney sweeping? It's a very rare form of cancer, but it happened so frequently amongst the profession that the sweeps had a name for it - Soot Wart!


HOW DO YOU TREAT SOOT WART WHEN YOU DON'T EVEN HAVE ELECTRICITY, INDOOR PLUMBING, OR IBUPROFEN?


Onset of the warty growths usually occurs between the ages of 20 and 40. Sometimes the sweeps would just cut the "wart" out by themselves, with a knife - ouch! - and hope for the best. Without some kind of attention, the cancer could eventually spread throughout the inner thigh, invade genitals, and eventually enter the pelvic cavity. What a horrible way to die!


According to A Brief History Of Scrotal Cancer, in Pott's day, 1775, the treatment was surgery without anaesthesia, or applications of a poultice containing arsenic (another carcinogen) that would kill the warty tissue and cause the growth to slough off. Oh-my-gosh! I am grossing myself out!

If a sweep was "as lucky as lucky can be," to quote Bert, he wouldn't have ignored the earliest stages of soot wart, sought medical attention (such as it was), and be lucky enough to be treated by a doctor/surgeon like Pott. 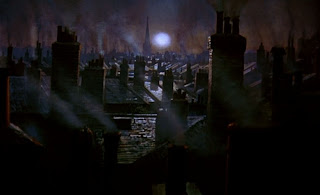 A carcinogenic magical wonderland of rooftops and products of combustion.

So… this winter, as you cozy up to the fire with a carcinogenic bottle of wine, and some popcorn(4), slip Mary Poppins into your DVD player (Netflix doesn’t stream it yet) and think about how lucky you are that you’re not a chimney sweep like Bert.


1. As stated in the last post, although these boys were all exposed to soot, not all of them would develop the cancer.
2. As opposed to German and other European sweeps who wore tighter clothing and had little or no incidence of scrotal cancer.
3. See CHIM CHIM CHERY #1.
4. Remind me later to talk about "Popcorn Lung".

Kriota Willberg
Kriota Willberg uses comics, needlework, historical studies, bioethics, and her experiences from her career as a massage therapist and health science educator to explore body/science narratives. Combining this history with her background as an artist and educator, she has been creating comics and teaching artists about injury prevention through panels, workshops, and her book, Draw Stronger, from Uncivilized Books. Her other comics appear in: 4PANEL, SubCultures, and Awsome Possum 3, Comics 4 Choice, Strumpet 5; and Graphic Canon; as well as the journals Intima and Broken Pencil. Willberg is the inaugural Artist In Residence at the New York Academy of Medicine Library. She teaches graphic medicine at NYU's Department of Humanistic Medicine. Opinions (and "facts") hers alone. Contact her at Kriota(at)earthlink(dot)net.