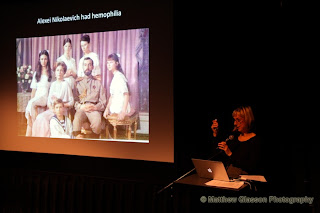 Me explaining hereditary mutations in Part 1 of my lecture.
Photo by the great Matthew Glasson.
THE INEVITABLE OVERTHROW OF THE HUMAN POPULATION,
DUE TO NOTABLE AND SIGNIFICANT INCREASES
IN ABERRANT CHROMOSOMAL PROLIFERATION OF MULTIPLE ETIOLOGIES
Part 3
From my Cinematologist lecture at Kevin Geeks Out: Visions Of The Future
Where were we? Oh, yes! In my last installment I had talked about inherited mutations, as documented above. Now we're on to acquired mutations....

Acquired mutations occur in the DNA of individual cells at some time during a person’s life.

Blonsky and Banner were not born this way, they were exposed to gamma radiation in adulthood.

Blonsky and Banner from The Incredible Hulk.

Acquired mutations cannot be inherited. For example, skin cancer is caused by UV rays mutating genes in the skin, but if you have skin cancer lesions when you get pregnant, your baby isn’t born with skin cancer, he has to acquire it himself. 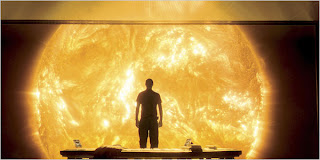 However, in order for the Hulk to pass on a genetic mutation, the sperm in his testicles would also have to be dosed with Gamma radiation. If Bruce Banner had held a lead apron over his testicles, his children would most likely be normal. If he wasn’t wearing an apron it is still impossible to predict HOW this altered genetic information will be expressed.

How will he express himself?

Additionally, having sex in either of his forms would not affect genetic expression.

Did he cover his testicles?

In 2084 When we set up colonies on Mars, mutation will advance by leaps and bounds. Thanks to miracles in modern science, acquired mutations due to inadequate radiation protection will become inheritable and PREDICTABLE, as demonstrated in the movie, Total Recall. 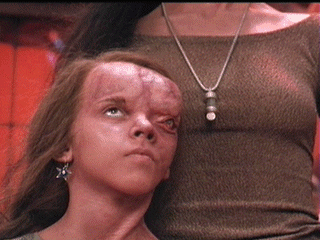 This girl has inherited a mutation 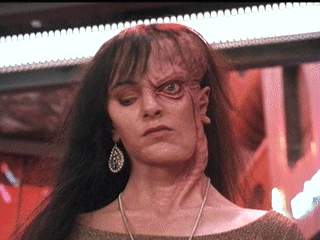 that her mother acquired!

However, according to films that afford us a vision of the future, disfigured mutants will not be valued by mainstream populations as deserving of respect. Additionally, reproductive success and the passing on genetic information requires that you find someone willing to have sex with you. Finding a reproductive partner is not a guarantee. It might be harder for some mutants... 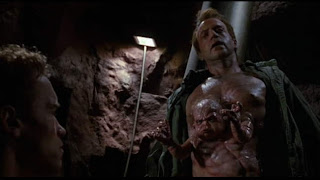 If a woman married George/Kuato,

would she be guilty of polygamy? 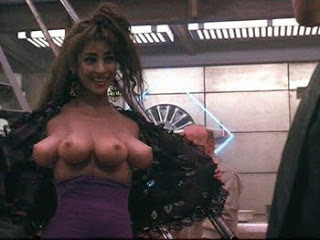 This mutation may be successfully passed

along to future generations.

Which mutant species will dominate the planet? Which mutagens will be the downfall of humankind? What are the chances of human survival in the future? These are difficult questions. But if there is anything to be learned by scientific investigation it is this: In the future, as now… 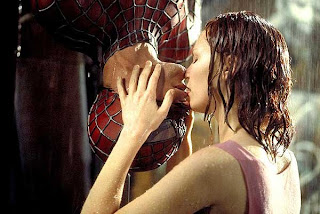 Love will find a way!
Thus ends my Kevin Geeks Out lecture. Next time we plumb the viral depths of I Am Legend!
Posted by Kriota Willberg at 2:47 PM No comments:

THE CINEMATOLOGIST LIVE
A couple weeks ago I presented a lecture on mutations in the variety show Kevin Geeks Out. The theme of the evening was Visions Of The Future! My contribution was to describe the future mutations of human kind that will eventually and inevitably happen, as predicted by many futuristic movies.
Happily, the show was sold out, so some local readers (sadly) didn't get a chance to see the show. I thought I'd post a version of my lecture here. Check out the link to KGO, below. There were some really great guests! I was lucky to be among such esteemed company. Plus, they served Dippin' Dots!

Kevin Geeks Out
Here's the first installment of my presentation. You'll notice that there are some style changes from the usual blog entries. There is much less text and many more pictures. It turns out that blogging and public speaking require different writing styles.
THE INEVITABLE OVERTHROW OF THE HUMAN POPULATION,
DUE TO NOTABLE AND SIGNIFICANT INCREASES IN
ABERRANT CHROROMOSOMAL PROLIFERATION OF MULTIPLE ETIOLOGIES(1)
In our examination of The Future, it is important to consider what will happen to the human species on a molecular level as we navigate an undending seires of collisions between meddling scientists and naturally occuring events.
The future is soon! As a matter of fact, according to some film sources, actions that will shape the future are happening right now! 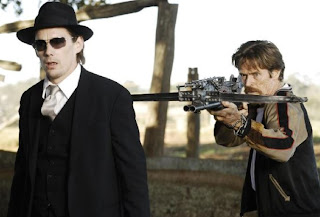 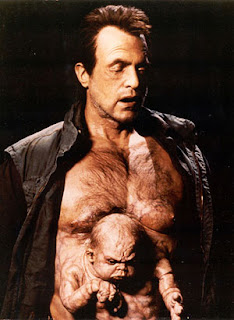 Total Recall, 2084
Chemical wastes, various forms of radiation, and viruses are just a few of the mutagens acton on our genes. At any moment we should expect to hear about a variety of mutant groups and sub-groups emerging into our public awareness.
Future mutation may be the result of genetic engineering, as with Rachel from Blade Runner... 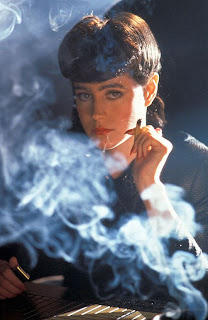 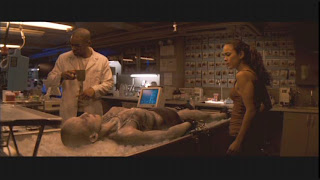 I Am Legend is about genetically
engineered measles viruses in the future.
Therefore, our discussion of the future will examine the inevitable mutation of human beings into monstrous future super-species. So let's get down to the mutation breakdown.
A mutant organism is the result of a genetic mutation. What is a mutation? The alteration of genes, chromosomes, or DNA (more on that later).
Some mutations of the future will be bad for you but won't cause an external variation in appearance. An example would be a genetic blood disorder like hemophilia. Alexei Nicholaevich, son of Tsar Nicholas II was a hemophiliac. He is pictured here in a still from the movie Nicholas and Alexandra. 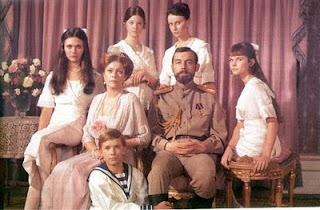 Hemophilia in the movies.
Some mutations will cause altered external appearance and will be bad for you too. An example here is a series of mutations caused by viral vampirism in Daybreakers. 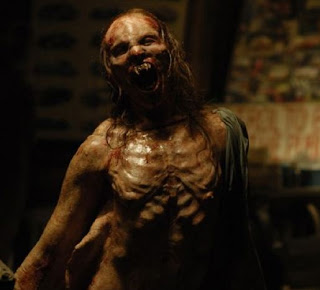 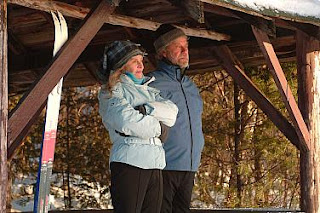 Away From Her
Some mutations won't help or harm you physically, like a generalized hypertrichosis a.k.a. Wolfman disease. Here is Robert Downey Jr. acting hypertrichosis for the camera. 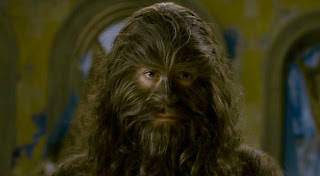 Note the exuberant hair growth.
Some genetic mutations change appearance and give your super-human skills. Here we see Hank McCoy's altered appearance as a result of mutation. 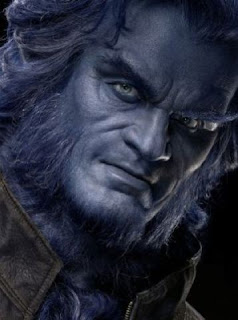 Exuberant hair + superhuman strength + blue pigment
What is the difference between chromosomes, genes, and DNA? Stay tuned(3) for the next installment of my lecture from Kevin Geeks Out: Visions Of The Future!
1. Yes, this really was my title.
2. We are so coming back to I Am Legend in a couple of weeks. There's a gold mine of mutation information here!
3. I just dated myself, didn't I?
Posted by Kriota Willberg at 1:23 PM No comments: 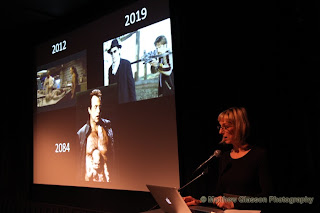 Me introducing future variations of genetic mutation.
Thanks, Matthew Glasson, for this great photo!
From Kevin Geeks Out: Visions Of The Future
In our last/first installment of my lecture at Kevin Geeks Out, I had just laid some mutation groundwork, based on favorite mutation films. Here in Part 2 we continue our exploration of mutations, with a look at DNA, chromosomes, and genes...
THE INEVITABLE OVERTHROW OF THE HUMAN POPULATION,
DUE TO NOTABLE AND SIGNIFICANT INCREASES IN ABERRANT
CHROMOSOMAL PROLIFERATION OF MULTIPLE ETIOLOGIES
Part 2
What is the difference between chromosomes, genes and DNA? 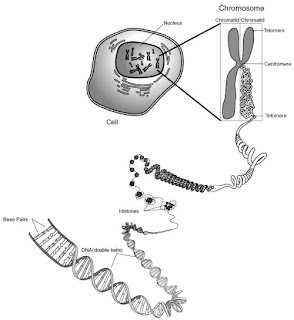 Chromosome
A chromosome is a bunch of tightly coiled and packed together DNA, 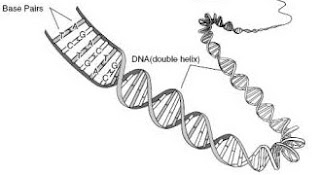 DNA
the DNA is your genetic material. 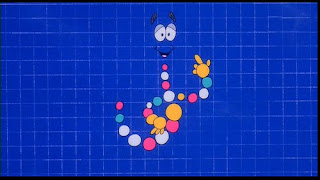 Mr. DNA from Jurassic Park
Genes are sections of coiled DNA in the chromosome.
A mutation occurs when a gene's DNA is altered. What the heck is DNA? Deoxyribonucleic acid, that what. It's made of stuff called nucleotides. A genetic mutation occurs when DNA in a cell’s gene is damaged or altered in a way that changes the information carried by that gene. 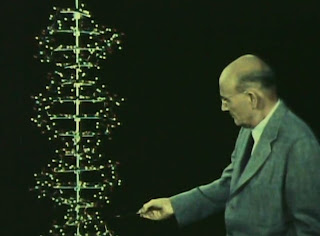 Thread Of Life, a Bell Labs educational film... it's great!

DNA does two things. First, it reproduces itself before a cell divides, in an asexual process called mitosis.

Here in this aesexual pornographic image (below), we see the cell dividing. DNA reproduction gives each cell the same genetic information. 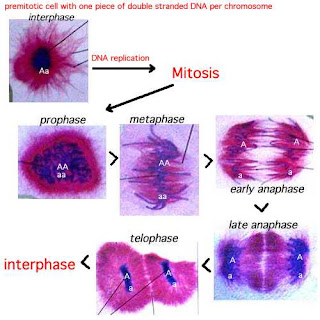 DNA also instructs cells to build proteins, which is a big deal. Proteins have the most varied functions of any molecules in the body. One of the things they do is to form the altered cell structures of the mutated Emil Blonsky and Bruce Banner.

Mutations of the present and future can happen in two different ways, either inherited from a parent, or acquired during a person's lifetime.

Mutations that are passed from parent to child are called hereditary mutations. They are present in the egg and/or sperm cells. The X-Men mutations are excellent examples of hereditary mutations. This type of mutation is present throughout a person’s life in virtually every cell in the body. They may be passed on to offspring, sometimes predictably, or in the case of the Brotherhood of Evil, unpredictably. 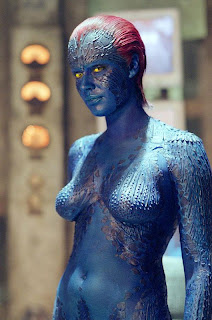 Mystique is a member of The Brotherhood

The slang term for Mystique’s hereditary mutation is “shape shifting.” She can create ovaries or testes, at will, as she transforms into a male or female person. We should assume that she has viable reproductive cells regardless of their external form (egg or sperm). The predictability of mutant genetic expression is unexplored territory, requiring further research. At this point in time we must consider genetic expression in mutant offspring to be always unpredictable.

What about the sex lives of humans with acquired mutations? Come back for the third installment of my lecture from Kevin Geeks Out: Visions Of The Future!

Kriota Willberg
Kriota Willberg uses comics, needlework, historical studies, bioethics, and her experiences from her career as a massage therapist and health science educator to explore body/science narratives. Combining this history with her background as an artist and educator, she has been creating comics and teaching artists about injury prevention through panels, workshops, and her book, Draw Stronger, from Uncivilized Books. Her other comics appear in: 4PANEL, SubCultures, and Awsome Possum 3, Comics 4 Choice, Strumpet 5; and Graphic Canon; as well as the journals Intima and Broken Pencil. Willberg is the inaugural Artist In Residence at the New York Academy of Medicine Library. She teaches graphic medicine at NYU's Department of Humanistic Medicine. Opinions (and "facts") hers alone. Contact her at Kriota(at)earthlink(dot)net.