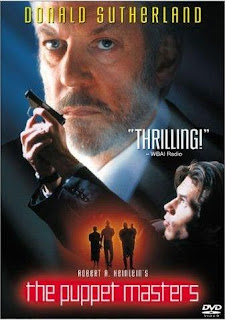 BACK TO THE (ALTERNATIVE) FUTURE

If there's one theme that is irresistible to Hollywood filmmakers and myself, it's parasites. You might counter this assertion by asking, "What about mutant viral epidemics? They are very popular, you know." That's true, but I think that nothing says science fiction like a parasitic infection, usually because mind control is part of the mix. We should also keep in mind that microorganisms like viruses, bacteria, and protozoa are technically parasites too, and that many of those microbes assert control over their victims, both in the movies and in real life(1). Therefore, it all boils down to parasites. They're everywhere!

The Puppet Masters book by Robert Heinlein was one of my favorites when I was a kid. To my delight, it was turned into a movie in 1994. What, exactly are Puppet Masters? They are alien hive-mind creatures, consisting of many individual slug-like organisms creating a collective consciousness. For you (movie) trivia buffs, these parasites are 60% brain tissue, according to government experts. 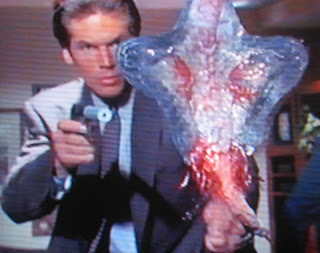 A "slug" resting quietly on a window pane. All brain, no brawn.

The individual organism appears to be something like a cross between a manta ray and a slug. It has a powerful tentacle so strong it can punch through wood. The tentacle disturbingly, resembles a (huge) erect male dog phallus. 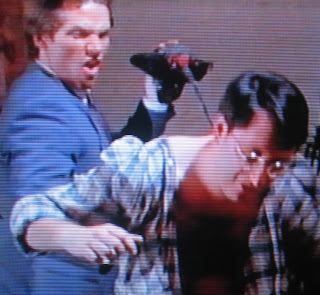 Recruitment of a new host. Ouch!

It inserts this appendage through the host's tissues, insinuating an extension of itself into the right and left hemispheres of the cerebrum, to the cerebral cortex. 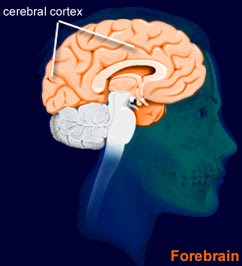 Here is a picture of the cortex.

The superficial (outer) part of the cerebrum is called the cerebral cortex. It's the area of the brain controlling memory, interpretation of sensory input, cognition, language, and willed movement. So it makes sense that this is the part of the brain the creature would want to interface with. 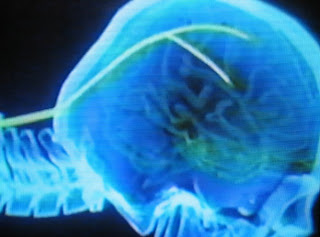 A puppet master insinuating itself into a victim's cerebrum.

Once ensconced in the host, the creature can access the person’s entire history and psyche, it knows the host intimately and communicates this information to it’s fellow parasites via an intertwining tendril system. This communication feature causes me to wonder if this movie may have inspired the inter-tendrilly communication of the Navi in Avatar. But I digress.

The human hosts are cognizant of this group-mind-knowledge, so everyone knows everybody else’s closest secrets. All dirty laundry is aired in the onslaught of the alien invasion. I’m not sure why government agencies want to save the people infected by the slugs. They now know all the state secrets, held in the minds of hapless government agents hosting the parasites. It seems that the FBI would want to kill all the people hosting slugs, for knowing too much. It's like a giant, psychic Wikileaks(2)! 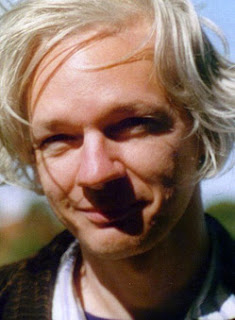 The parasite controls its host’s speech and movements. It also apparently increases the host body’s output of adrenaline (the hormones epinephrine and norepinephrine). Since the creature controls the brain, this could be done by causing a part of the brain called the hypothalamus to stimulate the adrenal medulla(3), via nerve impulses, creating a sympathetic nervous response in the body. This sympathetic system is often called the stress response or the fight-or-flight response because it pumps you up and gets your ready to kill, be killed, or run for your life.

How this sympathetic nervous system stimulation assists the alien creatures in over-riding the conscious control of its host is beyond me.

The fight-or-flight response prepares your body for immediate physical activity and the possibility of mortal injury. Respiration increases. Blood gets directed towards your brain (more for the slug!) and muscles. Blood is directed away from digestive and sexual organs. There will be plenty of time for eating and fornicating if you live through the immediate crisis. Blood volume goes up and the blood is altered so that it will clot more easily. Your heart rate increases, pupils dilate, and you sweat from all this increased metabolic activity.

However, in the movie, every parasitized human has no armpit stains and is breathing quite normally. They look quite calm, which doesn’t quite coordinate with the image of a person with a bunch of adrenaline pumping around in their bloodstream. 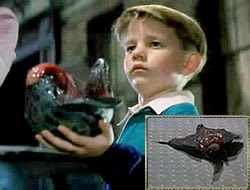 How can this be the look of a child ready to kill or be killed?

1. For more on microbial mind control, see the toxoplasma gondii references in my October 7, 2010 post.

2. It is impossible to know whether or not Julian Assange gets his information from infection with psychic alien invaders or a collection of uninfected humans, but the results do demonstrate some interesting parallels...

3. The adrenal medulla is a part of the adrenal gland, an organ that secretes hormones, sitting on top of your kidneys.

Posted by Kriota Willberg at 8:00 AM No comments: Links to this post

Kriota Willberg
Kriota Willberg uses comics, needlework, historical studies, bioethics, and her experiences from her career as a massage therapist and health science educator to explore body/science narratives. Combining this history with her background as an artist and educator, she has been creating comics and teaching artists about injury prevention through panels, workshops, and a series of minicomics, now combined with additional materials into Draw Stronger, to be published by Uncivilized Books in April 2018. Her other comics appear in: 4PANEL, SubCultures, and Awsome Possum 3, Comics 4 Choice, Strumpet 5; and the up-coming Graphic Canon; as well as the journals Intima and Broken Pencil. Willberg is the inaugural Artist In Residence at the New York Academy of Medicine Library. She also teaches anatomy for artists, and embroidery classes (not at the same time.) Opinions (and "facts") hers alone. Contact her at Kriota(at)earthlink(dot)net.